Within the past few days, retired Berea College Professor Bill Best has released his latest book, "Li'l Donnie: A Political Satire" and that release has been perfectly timed to coincide with the steadily worsening double headed crises of the Corona Virus and the steadily worsening economy both in the USA and worldwide.  It is also timed to have maximum potential influence on the upcoming election.  Bill is the author of several works of satire including "The Tragedy Of Platitudinous Piety" about the Jim Jones cult. 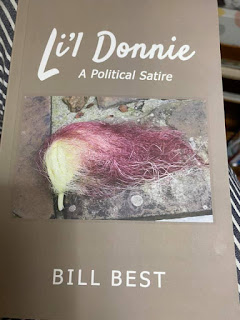 He is also the author of two important works about saving, propagating, and preserving Appalachian heritage food crops and is, perhaps, the nation's best expert on heritage tomatoes.  He also served as the editor of a wonderful book called "100 Years of Appalachian Visions".  On or about the day the TRAITOR Donald Trump came down the escalator in Trump Tower and announced his mistaken belief that he was fit to become the leader of the free world, Bill began taking notes for "Li'l Donnie" and completed it about a month ago.  The book discusses in cogent, satirical, and often hilarious terms the many crimes of TRAITOR Trump.  This is a book which every American should read before voting in the 2020 presidential election.  The book is available by mail directly from Bill Best and an autographed copy is only $15.00 which includes shipping via Media Mail.

In this book, Bill Best has managed to create a little "good trouble" to quote the late Congressman John Lewis, and in these times America needs all the "good trouble" we can generate.  Bill has lived up to the glorious history of political satire in this book and also complied with several admonitions from some of the most important satirists who have ever lived.  George Orwell said "In a time of deceit, telling the truth is a revolutionary act."  In this book, Bill Best has told the truth about the crimes which were committed by TRAITOR Trump in order to be sitting in the undeserved and hopefully temporary position which he currently occupies.  George Orwell also said, "If liberty means anything at all, it means the right to tell people what they do not want to hear."  I have no doubt that Bill Best has told the few million misled Americans who still believe the lies and ignore the crimes of TRAITOR Trump some things they do not want to hear but they sure as hell  need to hear it.  Mark Twain, perhaps America's best satirist, said "There are basically two types of people.  People who accomplish things, and people who claim to have accomplished things.  The first group is less crowded."  Bill Best had taken his place in that second, less crowded group many years ago with his previous works as a satirist, educator, and heritage crop expert.  With "Li'l Donnie", Bill leaves no doubt that he still belongs in that second group.

Before I leave you with my heartfelt advice to buy and read a copy of "Li'l Donnie, I should make the following disclosure in the interest of total honesty: I wrote the Afterword for the book.  But that has little or nothing to do with the importance of the book and I also state for the record that I do not receive a penny for the few pages I wrote in it even if it eventually tops the best seller lists all across the country.  I contributed the Afterword because Bill Best offered the opportunity to do so and I respect him greatly.  I also have always lived by another admonition to Always Stand Up, Speak Up, and Speak Out, and if Bill Best was willing to give me an opportunity to do so about TRAITOR Trump I was sure as hell going to make an honest effort to do my part.

The book, autographed and mailed by USPS Media Mail is available for $15. 00 from:

Welcome to My Appalachian Life!!! You will find a growing variety of opinions, history, biography, memoir, and stories about Appalachia, my varied life in Appalachia, and the need to preserve, defend, and propagate elements of Appalachian Culture. Have fun!!! Roger Hicks